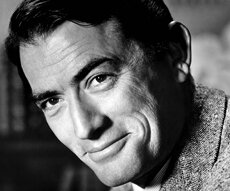 Lured into acting while a pre-med student at Berkeley, Peck was so poor as a young actor in New York that he often slept in Central Park. Little did he anticipate that he would become one of the greatest movie figures of all time. Known for characters who personified bravery and kindness, Peck is primarily remembered for his Oscar-winning portrayal of Atticus Finch — a Southern lawyer defending a black man accused of rape — in the classic To Kill a Mockingbird. He swept Audrey Hepburn off her feet in Roman Holiday, confronted anti-Semitism in Gentleman’s Agreement, and teamed up with Alfred Hitchcock in Spellbound, among numerous unforgettable roles. A staunch supporter of liberal causes, Peck was awarded the Presidential Medal of Freedom, the nation’s highest civilian honor, in 1969. Approaching age with dignity, he was quoted in the LA Times obituary as saying: “I’m aware it’s autumn. But I’m not bothered. … I love my work and my wife and my kids and my friends. And I think, ‘You’re a lucky man, Gregory Peck, a damn lucky man.’”