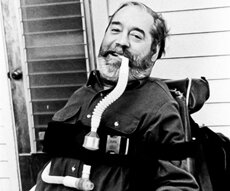 Hailed as the father of the independent living movement, Roberts arrived on campus in 1962 with his wheelchair and an 800-pound iron lung he needed for sleeping.  A quadriplegic since contracting polio as a teen, he encountered discrimination as the first student with significant disabilities to attend Berkeley. With other students called “The Rolling Quads,” he pressed for improved campus accessibility and services. In 1972, Roberts co-founded Berkeley’s Center for Independent Living, a groundbreaking advocacy and services program. A MacArthur Fellow and president of the World Institute on Disability, he fought until his death in 1995 to ensure that those with disabilities could fully participate in society. In honor of his birthday and trailblazing contributions, California observes January 23 as Ed Roberts Day.