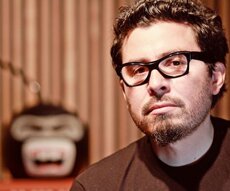 Hector “Hecdog” Perez is a rare composer who meshes the traditional music of Veracruz, Mexico, with the hip, chill beats of electronica. His debut album, Sistema Bomb Presenta Electro-Jarocho — a 21st-century re-imagining of the Afro-Mexican son jarocho style — oozes so much cross-genre cool that it grabbed a 2013 Grammy nomination for Best Latin Rock, Urban or Alternative Album. Hecdog also co-produced the album Sembrando Flores by Los Cojolites, which scooped up a 2013 nomination for Best Regional Mexican Music Album. In addition to his award-worthy work, Hecdog is the founder of Music Orange, a commercial music company that counts Apple, Sony, Gap, eBay, and VISA among its clients. Listen to Sistema Bomb on SoundCloud, or follow Hecdog on Twitter @SistemaBomb.