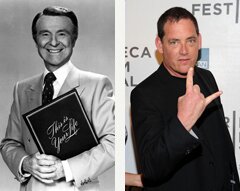 Considered the “godfather” of reality-based programming, Ralph Edwards ’35 (left, 1913–2005) is best known as the creator, producer, and host of This Is Your Life, the TV classic that surprised unwitting guests with on-air remembrances by family and friends. Among hundreds of honors, Edwards has two stars on the Hollywood Walk of Fame. Today’s reigning king of reality TV, Mike Fleiss ’87 (right) has achieved unmatched success as a producer of numerous shows, including The Bachelor and The Bachelorette. He has also dipped into feature films and directed the documentary God Bless Ozzy Osbourne. Follow Fleiss on Twitter @fleissmeister.