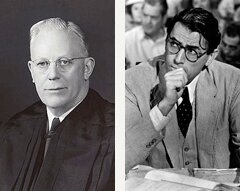 The 14th Chief Justice of the U.S. Supreme Court, Earl Warren 1912, J.D. 1914 (left, 1891–1974) brought a divided court together in Brown v. Board of Education, which overturned the infamous “separate but equal” ruling by banning segregated schools.  In the 1962 film classic To Kill a Mockingbird, Gregory Peck ’39 (right, 1916–2003) portrayed Atticus Finch, a lawyer who courageously defends a black man wrongfully accused of rape in the Depression-era South. Peck, himself a model of moral integrity, became synonymous with Finch, movie history’s most revered fictional character to fight for racial justice.