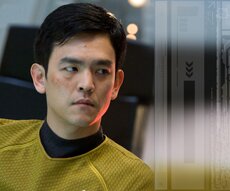 Following a path from Korea to Cal to the final frontier, Cho practically stumbled into acting as a Berkeley English major when he spontaneously filled in for an actor who had dropped out of a play. Today he is one of the most popular Asian American actors of his generation. Cast in comedies when “people didn’t think Asians could do comedy,” he counts the American Pie and Harold and Kumar series among his credits. His latest undertaking has been reprising the iconic Sulu in the films Star Trek (2009) and Star Trek Into Darkness (2013). George Takei, the first Sulu and Cho’s hero, lured him into the series as a kid. “When you’re switching the channels and you see someone who looks like you, you freak out,” he said. A quote in his IMBD profile said he wasn’t interested in splashy debuts, but rather “sustaining a career, because that’s what’s truly difficult.” Let’s hope Cho is just getting started. Follow him on Twitter @JohnTheCho.