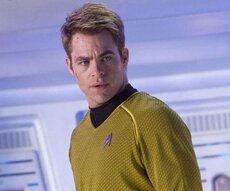 When Pine landed the role of James T. Kirk in J. J. Abrams’s 2009 Star Trek reboot, he wrote the USS Enterprise’s first captain, William Shatner, to explain “who this punk kid was taking over for him.” That self-deprecating nature has stayed with the rising star, even as the film’s sequel — hailed by the Washington Post “as a triumph of casting” — hits theaters. Balancing respect for Shatner’s historic portrayal with making the part his own, Pine said, “The first thought is always don’t screw it up.” Like fellow Bear and crewmate John Cho ’96, Pine didn’t catch the acting bug until he was an English major at Cal, despite his Hollywood roots. He grew up in a house where his father, a veteran film and television actor, “had good years and lean years.” But for the younger Pine, 2013 will be a very good year. He’ll soon swap out his yellow shirt and spacecraft for black threads and a motorcycle in the title role of Jack Ryan, Tom Clancy’s beloved CIA analyst, releasing this December.