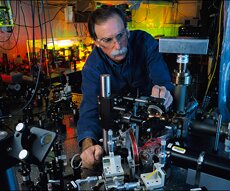 Controlling particles in a quantum world was previously thought impossible, but Wineland invented ways to measure and manipulate individual particles without destroying them  — a feat that won him the 2012 Nobel Prize in Physics. Single particles lose their enigmatic properties the minute they interact with the outside world, making it difficult to observe many seemingly absurd events. Wineland’s ingenious methods involve trapping electrically charged atoms, or ions, and controlling and measuring them with light, or photons. A physicist at the National Institute of Standards and Technology (NIST) and the University of Colorado in Boulder, he shares the prize with French physicist Serge Haroche. Their research is giving shape to the dream of building a super computer based on quantum physics.