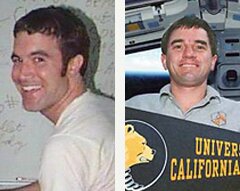 An early trailblazer in social networking, Tom Anderson ’98 (left) co-founded Myspace in 2003 and gained widespread popularity when new accounts designated him as a default “friend.” Believing that “everything got better when it was social,” Anderson remained with the company, which focuses on interaction via music and other entertainment, until 2009. Follow him on Twitter @myspacetom. A veteran of three shuttle missions, NASA astronaut Rex Walheim ’84 (right) has logged millions of sky-high miles. His expeditions to the International Space Station included the program’s final voyage in July 2011 and a handful of spacewalks. “It’s important to keep pushing our boundaries,” says Walheim, who dreamed of space travel as a boy growing up in the Bay Area.