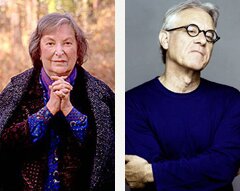 More than 10 years after her death, Pauline Kael ’40 (left, 1919–2001) remains the most influential figure in film criticism today. The longtime movie reviewer for The New Yorker, she could make or break careers with her biting wit and standout opinions. The Godfather, Taxi Driver, and Carrie are among many movies she championed during the 1970s. One of America’s foremost music critics, Greil Marcus ’67, M.A. ’68 (right) has made a career of placing rock and roll within its broader political and social contexts. His 1975 book Mystery Train reminds readers of why music matters. In a 2010 review of his book on Bob Dylan, the San Francisco Chronicle wrote, “Marcus has done more to build the Dylan myth than the curmudgeonly man himself.”