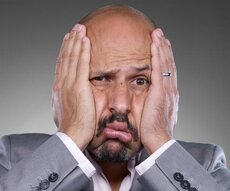 Although his parents thought his wit and flair would make him a great lawyer, Jobrani was first  bitten by the show-biz bug when he played a tree in a school play at age 6. Bridging the rift between the Middle East and West, Jobrani’s taboo-tampering comedy elicits laughter around the world. He is best known as a founding member of the Axis of Evil Comedy Tour, a group of top comedians who sold out a recent international tour of 27 shows and landed a special on Comedy Central — the first show on American TV with an all-Middle Eastern/American cast. Jobrani himself has been on The Colbert Report, The Tonight Show with Jay Leno, and NPR’s Wait Wait Don’t Tell Me, among other shows. He also appeared in the movies The Interpreter and 13 Going on 30. Follow him on Facebook or Twitter @MazJobrani.