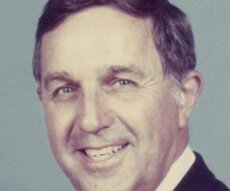 As the tune “Do-Re-Mi” from The Sound of Music concludes, “When you know the notes to sing, you can sing most anything.” That was certainly true for Brownson, a demonstrably kind man nicknamed “Howdy.” Once he learned his do-re-mis as a child, he didn’t stop singing in barbershop quartets, choruses, or church choirs until his death in 2013. A founder of the University of California Men’s Octet, Howdy was a treasured guest at every Octet reunion, where he enchanted younger alums with colorful tales of the old days and led them in Cal fight songs. In this rare video clip of Howdy singing with the Barbary Coasters, one of about 10 quartets he joined throughout his life, he said he wasn’t interested in serious competitions. “This is just for the hell of it. It’s good stuff.” That same motivation drove a passion for volunteering and traveling as well. He and his wife, Mary ’48, were generous lifelong supporters of Cal music and the Cal Alumni Association, and had a huge world map covered with pins marking where they had been. His advice to other travelers: “Just have fun. We go places for the going, not the getting there.”