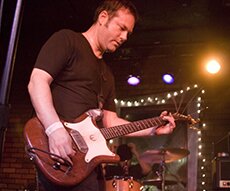 While DJing in the mid-1980s at KALX, Berkeley’s student radio station, Portman, AKA Dr. Frank, became what most people only dream of: a rising rock star. He cofounded The Mr. T Experience (MTX) — a leading light of the Bay Area pop-punk scene that launched Green Day — and has remained its primary songwriter, singer, and guitarist since then. In recent years, Portman has turned his knack for writing smart, humorous, and youthful songs into writing young adult fiction. His 2006 debut novel, King Dork, is now a cult classic and was described by the San Francisco Chronicle as “smart, funny, occasionally raunchy, and refreshingly clear about what it’s like to be a geeky guy in high school.” Andromeda Klein (2009) follows an occult-obsessed teenage girl, and King Dork Approximately is due this fall. In describing his reluctance to shift from songs to books, Portman said in an interview: “When I found out that Random House had bought [King Dork], my first thought was, ‘Oh, my god. Oh, no. Now I have to finish it.’ … It’s like with music. There’s an energy you get from discovering how to do something that is special.” Find Portman — plus updates on the movie version of King Dork — on Dr. Frank’s What’s-it blog, Facebook, or Twitter @frankportman.