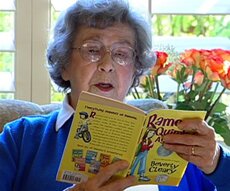 There are no wizards, superheroes, or princesses in Cleary’s literary world — just normal kids with normal lives. But that hasn’t stopped her from becoming a phenomenon among decades of young readers worldwide. From the adventurous Henry Huggins to the plucky mouse on a motorcycle to the ever-popular, pesky Ramona Quimby, Cleary’s characters speak to such universal kid concerns as homework, family, and pets. Declared a “Living Legend” by the Library of Congress, she has sold more than 91 million copies of her books in more than 20 countries. Although kids’ lives have changed dramatically since she published her first book in 1950, Cleary, who majored in English, said in a New York Times interview that “children want the same things my generation wanted — a home with loving parents, and children to play with in safe neighborhoods.” Not to mention “funny books about children like themselves.”