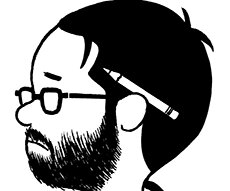 Tomine, an acclaimed cartoonist and illustrator, started publishing his Optic Nerve mini-comics in high school, and “even the earliest and roughest of them,” wrote the Houston Chronicle, “feature the mix of wit and bullied awkwardness that would inform his subsequent work.” By the time Tomine entered Berkeley in 1992, Optic Nerve was making waves and, two years later, was picked up by prestigious publisher Drawn & Quarterly. It wasn’t long before critics and fans began debating whether or not Tomine was indeed the voice of self-conscious Generation X. ”The first time it came up,” he told The Believer, “I was doing a talk at a bookstore, and the woman … introduced me using that phrase, and I remember just feeling like, ‘Oh, now I’m really in trouble.’” His work has now been collected in seven books, and he has taken on some high-profile gigs — including myriad interior illustrations and more than a dozen covers for The New Yorker. His 2004 cover “Missed Connections” became iconic and, according to the Paris Review, “sums up what makes city life frustrating but also thrilling.” Keep up with Tomine on his website.